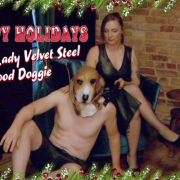 Every once in a while, a celebrity drops in my Studio Lux in Berlin. Usually I can never tell anyone about who was visiting me, and what we did. Discretion is a big part of my business and I value it highly. What happens in Studio Lux stays in Studio Lux – but not this time.

The redheaded comedian Conan paied me a visit on his Berlin Tour – having a little taste of being dominated by yours truly. He brought along his camerapeople, a soundengineer, at least one writer, producers (Hi to the lovely TINA, when you produce in Germany, hire her!) and the rest of his entourage. Quite astonishing to see how many people wanted to pile themselves into our little dungeon.

I was quite excited, as Conan is a staple of late night talks. I do not follow american TV, but I know the guy from long late night youtube sessions, you know, when you should sleep and get up fresh and early the next day, but you just have to watch this one clip, and then that one. I am sure we have all been there and done that. If you do not know Conan, I recommend to watch his little series about Videogames, or when he went to visit a Korean Spa.

It was quite funny, because the whole thing almost did not happen. When the production company called us, my dear colleague Johanna Weber answered the phone. “What? No, the american market is not very interesting for us. I don´t think so.” She spoke to an unknown caller when we sat in the studio together.

She put the phone aside, and asked me: “I don´t think we will do it, but would you be interested to do some video with an american comedian?” – “I don´t know” I said, not being very interested. After all, we get a lot of calls by attention seeking media for all sorts of often exploitative formats, “who is it?” – “Some guy called Conan” – “Aaaaaaaaaaaaaaaaaaaa – give me the phone!”.

We set up a date and I got asked if I could organize maybe a second lady to be present as well. Sure thing! Pixie P. Magic was delighted to help out.

I was not quite sure what to expect about the whole ordeal, so I started studying. Background, education, start of the whole late night business, what sort of humour is at play, are people being ridiculed? After all sexuality and especially BDSM, let alone in the context of professional sexwork, is a very sensitive matter. Of course the clip is going to be comedy and not deep meaningful politics, but fun. However, if I would have had any doubts I would not have agreed. I perceive the format “Conan” and the humour as quirky, nerdy, with lot of potential to laugh about oneself and not downplaying others.

It is always exciting to meet people who are in the public domain in person. How much of the Alter Ego “Conan” is a role to be plaied? Is the person behind the scene an icecold business man with his eyes set on profit? How close is his personality to the public figure? Do I want to take the risk and produce a clip that is potentialy seen by millions with a man I do not like in the end? Turns out, Conan is charming, very smart and absolutely professional.
I felt very relieved. It is always more fun to play with someone who you think is sympathic. Especially when the world will watch.

NO details here, about what exactly we did – you will have to watch the video when it airs – but there is one thing I can say: Conan might be a great talk show host and comedian, but he is no submissive.

Sadly the time frame was fierce and we plaied longer than we should have. I would have loved to talk and learn a bit about the person behind the celebrity and also to his writer. First of all, I enjoy debriefing after a session and second of all, I like to meet people with interesting jobs and lifestyles. Maybe next time!

If you have any questions about this experience, please fell free to ask them in the comments.

Want to join the discussion?
Feel free to contribute!

The Difference between a Domina and a Bizarrlady

This site uses cookies. By continuing to browse the site, you are agreeing to our use of cookies.

We may request cookies to be set on your device. We use cookies to let us know when you visit our websites, how you interact with us, to enrich your user experience, and to customize your relationship with our website.

Click on the different category headings to find out more. You can also change some of your preferences. Note that blocking some types of cookies may impact your experience on our websites and the services we are able to offer.

These cookies are strictly necessary to provide you with services available through our website and to use some of its features.

Because these cookies are strictly necessary to deliver the website, refuseing them will have impact how our site functions. You always can block or delete cookies by changing your browser settings and force blocking all cookies on this website. But this will always prompt you to accept/refuse cookies when revisiting our site.

We fully respect if you want to refuse cookies but to avoid asking you again and again kindly allow us to store a cookie for that. You are free to opt out any time or opt in for other cookies to get a better experience. If you refuse cookies we will remove all set cookies in our domain.

We provide you with a list of stored cookies on your computer in our domain so you can check what we stored. Due to security reasons we are not able to show or modify cookies from other domains. You can check these in your browser security settings.

We also use different external services like Google Webfonts, Google Maps, and external Video providers. Since these providers may collect personal data like your IP address we allow you to block them here. Please be aware that this might heavily reduce the functionality and appearance of our site. Changes will take effect once you reload the page.