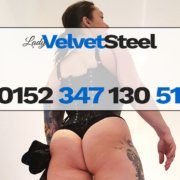 In 2007 I sat in the first domina studio I had ever worked in, at Lady Colette’s, in Tiergarten, back building, 3rd floor. You had to climb a steep creaky staircase and then you were allowed to ring the doorbell. Behind it: 2 playrooms, 2 bathrooms, 1 clinic, 1 kitchen and a tiny lounge. In it I sat with a colleague who rented in for clinic sessions. Unfortunately, I have forgotten her name. So we sat there and chatted, as you do when you’re sitting around at work and there’s nothing to do. It was important to Colette that everything was always spotlessly clean and tidy – we were done with that. Now it was time for coffee and chatting.

I was still green behind the ears – very old hands will still remember my first working name “Lucy DeLunatic”. At the time it seemed very profound to me and I loved the play on words. But after it didn’t go down well with my increasingly German guests, I changed it at some point and became the person you know today. These days I would probably keep the name, I think, as the trend is towards the first name-surname combo. But I digress.

So there we sat, chatting. As we should, our phones were on the table. Meaning: the studio phone and the colleague’s phone. “Where’s your phone?” – “I only have a private one and I don’t want to use it” – “But you need a phone!” – “Yes, I know, I have to get a sim card” – “You know what? I still have one left, it’s a prepaid card, it’s already activated, I don’t need it. You can have it!” – “Wow, great, thanks! I’ll take it with pleasure!”. And indeed, the next day she brought me the card and I had a new number.

What I didn’t have: the colleague’s details. But that was to become a problem much later, exactly a week ago. Until then, I used the number diligently. Always in old, simple “brick mobile phones” – e.g. the very old Nokia that Caneboy had given me when he couldn’t call me once because my phone had died. It quickly became my favourite mobile phone. It could be called – and that sums up all the functions that were important to me – and it was indestructible, so to speak. Believe me, I really did try (accidentally, of course) to break the thing.

Once, in the Novem Viginti, it crashed down the entire tiled staircase from the lounge into the studio and consequently shattered into all its component parts. I had just arrived for a guest stay and was pretty broke – I couldn’t buy a new phone and I couldn’t be reached, catastrophe! Now that I will stay for two weeks. So I sprinted down the stairs at lightning speed to lament my “ah & woe” and picked up the parts: Both parts of the mobile phone shell, the keyboard rubber part and the battery. Put them together, switched it on and voilá, not even as much as a scratch! Take That, iPhone! Unfortunately, after almost 8 years of daily use, the charging socket broke on me and repairing it was not an option.

The subsequent “easy peasy” phones were unfortunately not good in function either. Voice quality was subterranean, quickly broken, annoying ringtones that could not be set differently. In the meantime, my requirements had changed – I still don’t answer text messages – the typing on tiny buttons or mini-keyboards on the screen gets on my nerves – but Telgram would be nice. To celebrate my birthday, WilderTom gave me a simple smartphone. It’s just a shame that the standard sim doesn’t fit.

Doesn’t matter, you can cut it to size. Yes, theoretically you can, but not the old Vodafon sims. OK, so I order a new Nanosim. And that’s exactly where the “not exchanging data” with the colleague at the time many years back in that stuio fell on my feet. Because the SIM is of course registered as required by law. Just not in my name. And because of the handshake business that is so common in brothels, I don’t have anything in writing. It doesn’t matter that I’ve been using the SIM exclusively for more than 14 years. You know, data protection and all that.

Well, long story short. I now have a new number. It’s still prepaid, I still don’t call back or answer text messages, but I’ve now installed Telegram and will also set up a channel. You can follow me there and if everyone is nice and good, there will be pictures, clips and other nice updates. Looking forward to seeing you!

Want to join the discussion?
Feel free to contribute!

It’s my birthday, and I’ll party if I want to!

This site uses cookies. By continuing to browse the site, you are agreeing to our use of cookies.

We may request cookies to be set on your device. We use cookies to let us know when you visit our websites, how you interact with us, to enrich your user experience, and to customize your relationship with our website.

Click on the different category headings to find out more. You can also change some of your preferences. Note that blocking some types of cookies may impact your experience on our websites and the services we are able to offer.

These cookies are strictly necessary to provide you with services available through our website and to use some of its features.

Because these cookies are strictly necessary to deliver the website, refuseing them will have impact how our site functions. You always can block or delete cookies by changing your browser settings and force blocking all cookies on this website. But this will always prompt you to accept/refuse cookies when revisiting our site.

We fully respect if you want to refuse cookies but to avoid asking you again and again kindly allow us to store a cookie for that. You are free to opt out any time or opt in for other cookies to get a better experience. If you refuse cookies we will remove all set cookies in our domain.

We provide you with a list of stored cookies on your computer in our domain so you can check what we stored. Due to security reasons we are not able to show or modify cookies from other domains. You can check these in your browser security settings.

We also use different external services like Google Webfonts, Google Maps, and external Video providers. Since these providers may collect personal data like your IP address we allow you to block them here. Please be aware that this might heavily reduce the functionality and appearance of our site. Changes will take effect once you reload the page.